Great philosophers have said throughout the ages that change is inevitable, and that certainly seems true in the digital age we’re living in. Research firm IDC predicts that by the end of 2018, we’ll have more than $1 trillion invested in digital transformations, and most experts only expect this trend to accelerate. I recently tested this theory during a keynote at the Human Capital Institute. I asked for a show of hands: How many of 1,000 HR, talent and learning executives present were currently or had recently undergone a digital transformation? Not surprisingly, all but a few in the room raised their hands.

Unfortunately, there is also a parallel trend. It turns out that change is hard for humans, especially when our jobs or the success of our businesses depend on it. In spite of huge investments in technology and high-priced consultants, the failure rates of companies undergoing digital transformations are staggering. According to Gallup, 70% of change initiatives fail; other estimates say as many as 84% of companies undergoing digital transformations are unsuccessful.

Why The Human Side Of Change Is So Challenging

Why is change so challenging for people, even when we know it is necessary or useful for us? It may have to do with how our brains are wired. According to integrative neuroscientist Dr. Evian Gordon, Ph.D., MD, maintaining safety is the core driver of brain function — what he calls the “safety 1st principle.” (Full disclose: I sit on the advisory board for Dr. Gordon’s health platform, Total Brain.) Even beneficial change can be seen by our nonconscious brain as a threat. Change often requires that we learn new skills and build new habits, which challenge the certainty of our current actions and can make us feel we’re losing control.

Change creates a perception of threat that can put management and executives tasked with leading change directly in conflict with their own brains’ core needs for safety and stability. At the moment when they need to be open, flexible and adaptive, they may fall into the trap of being defensive, protective and closed, undermining their own best efforts. Even the best technical and management solutions can’t overcome this evolutionary hardwiring of our brains. Leaders can explain the need to change all day, yet such rational, objective reasoning does little to make change successful.

So, how can we cultivate new patterns of thinking and ways of working together that allow us to embrace change?

Whether consciously designed or not, teams practice rituals that send their members messages, or cues, about what is safe, acceptable and predictable. These rituals create and reinforce social norms. Rituals can be generative and can reward innovation and ingenuity, or they can send messages that cause team members to remain closed and protectionist — to shut people down — as we often see in siloed organizations. The regularity of rituals reinforces ways of thinking and behaving so they become second nature to us. We can build in intentional rituals that allow people to practice remaining open and curious, creating new brain patterns that become stable over time and that can persist even during times of change and uncertainty. The familiarity of rituals can give us a sense of certainty and stability, even as they are nudging us toward evolving and changing.

Peter Cooper, the legendary investor, founder and CIO of Australian investment firm Cooper Investors (a former client of mine), uses regular rituals based on neuroscience and universal human values of humility, curiosity and being in the present moment. CI’s approach to rituals is not common in the financial industry, shiny object management trends, nor are they found in formulaic management techniques often taught in MBA programs. The rituals that CI regularly practices prime their employees to deal with uncertainty in the market and protect them from overcompensating in the face of threat. A ritual around humility, for example, can include regularly acknowledging that many investment decisions are based on partial information; it can be modeled by admitting mistakes and not doubling down on faulty thinking to save face.

Creating norms and rituals around being present can include explicitly calling out the typical biases and heuristics (mental shortcuts) that prevent us from observing things as they are — for example, our bias toward confirming what we already believe. Rewarding curiosity can cultivate learning mindsets, which are vital to being open to change and finding new possibilities. At CI, for instance, investors and executive leadership understand how rational thinking is only part of the problem-solving process, and they are allowed space to give both rational and intuitive explanations when thinking through complex problems.

As humans, change is never easy. We may be wired to resist it because of the “safety 1st” principle. Understanding and acknowledging that our nonconscious minds drive much of our conscious thoughts can help leaders and teams feel safe and stable, even during uncertainty. Building the right rituals can allow us to buffer against our automatic reflexes to threat and create social norms that reward the flexible, open thinking we need to keep up and thrive in uncertainty.

What have been your experiences been with overcoming the threat of change and forming new habits to adapt to change? 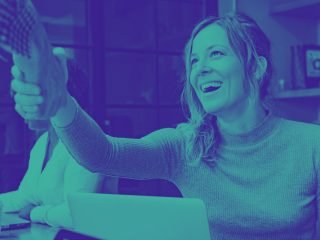 Next Post (n) Discerning What Matters As Leaders: Love (Forbes)